A Matter of Agreement

Many ‘accepted’ assumptions about the global economy are currently under challenge and this applies equally to the international trade sector. This article is an attempt to step back from the noise around Brexit and begin to make sense of the wider architecture of trade agreements of which the current negotiations are merely a sub-set.

A common thread of the post Second World War ‘consensus’ was the bedrock of Multi-lateral agreements captured under GATT (General Agreement on Tariffs and Trade).  A series of trade rounds ultimately brought under the umbrella of the WTO (World Trade Organisation), culminating in the Uruguay Round (1996) and subsequent implementation of the agenda defined at that point. In recent times, there has been more of an emphasis on Regional Trade Agreements.

It's a complicated area and it helps if we define a few of these terms to make it easier to understand:

Examples concluded in the last year include agreement between the EU and Japan and the Comprehensive and Progressive Agreement for Trans-Pacific Partnership (CPTPP), covering more than ten Nations from across Regions.  Also several smaller agreements have also been finalised in this period.

So, despite the headlines around trade disputes, there is still some momentum to streamline trade and we will add some more context to this in the next article. 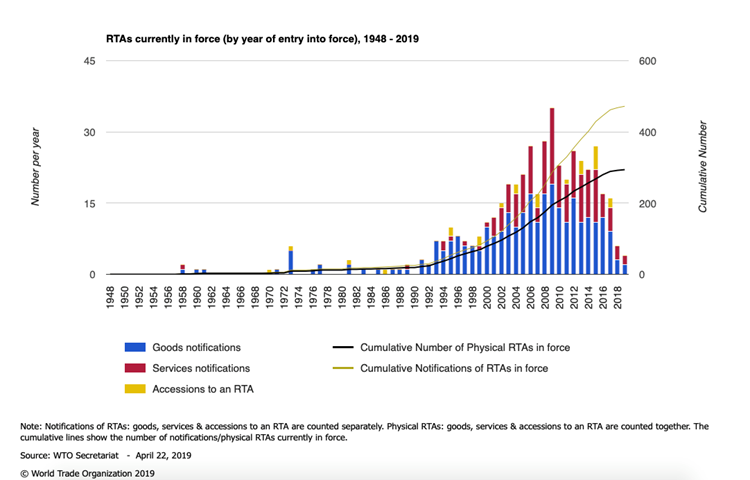 David Millett is a coach and trainer who works regularly for RWA. He has a long experience in trade issues with a background in banking, where he was Head Of Trade Product Management for the Royal Bank of Scotland, before becoming Head of Business Development for UK Export Finance’s short-term business. David is a Fellow of the Institute of Export and former Council Member for the International Chamber of Commerce UK and the British Exporters Association.

Get RWA Insight In Your Inbox

Regular business news and commentary delivered direct to your inbox each week. Sign up here